How to Report Imaging (X-Rays) of the Thumb

If you've ever taken piano lessons, you know that the thumb is considered the first finger of the hand. Anatomically, it is also referred to as the first phalanx (finger). However, when you are coding an x-ray of the thumb, images are captured of the thumb, hand, wrist, and all of the joints in between. How you code a radiograph that includes the thumb depends on what is being looked at, as well as any NCCI edits that may exist between the imaging codes being reported.

Let's do a quick review of the anatomy associated with the thumb: 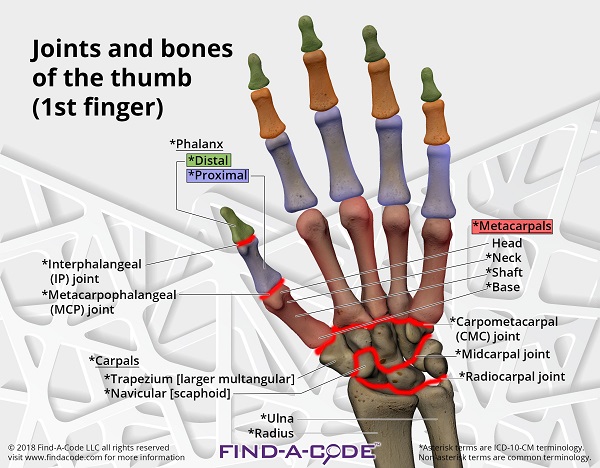 When the documentation refers to the first metacarpal as a “fracture of the thumb,” it can cause confusion for coders, which is why understanding the anatomy makes all the difference. Codes for reporting imaging of the bones of the thumb, hand, and wrist include:

An image of just the hand almost always includes some view(s) of the fingers, thumb, or wrist – it is just inevitable since we are talking about imaging such a compact and small area. However, attention should be paid to the imaging order from the physician (what was ordered and why) and what was actually produced. If there isn't enough detail to clarify the order, a provider query identifying the issue should be submitted and waited upon for a response before the final code assignment is made.

Additionally, the final diagnosis code assigned to the encounter must support the imaging performed, either with an injury code or a condition, symptoms, or disease code. If imaging is done "in-house," the documentation must identify a reason for the order, that the provider requested the imaging and why, along with documentation of the findings, which could shed further light on the situation as well.

When imaging is focused on a potential problem with the CMC joint, or the carpals nearest the thumb (trapezium or scaphoid), report code 73110 (see CPT Assistant 2018; Diagnostic Radiology (Diagnostic Imaging) for imaging of the wrist.

If imaging is focused on the injury located at the interphalangeal (IP) joint, report 73140.

However, in those instances when the provider isn't exactly sure where the injury may be located or the extent of the damage and as such, orders multiple images of the fingers, hand, and wrist, the National Correct Coding Initiative (NCCI) edits provide guidance important for proper reporting of the images.

A review of the actual images produced included more views than originally ordered, including:

Plugging these codes into the Find-A-Code NCCI Edit Validation tool reveals an edit between 73140 and 73130, with an NCCI indicator of “1.” The "1" indicates that under the appropriate circumstances, an NCCI modifier, such as modifier 59, or RT and LT, could be appended to code 73140 to override the edit. But, how do you know when it is appropriate to override this NCCI edit?

There are two main reasons for overriding an NCCI edit:

Since both 73140 and 73130 were performed during the same encounter and anatomic site (thumb and hand being contiguous sites), it is appropriately bundled for the circumstances and not eligible for modifier 59.

The following is an example of a circumstance in which an NCCI modifier would be appropriate to override the NCCI edit:

A 32-year old female suffered a traumatic injury to her left thumb and right hand after falling down the stairs about an hour ago. She admits to stretching out her hands to try and break her fall. She complains of left thumb pain that radiates into the wrist and pain in her right index and middle fingers. Radiographs, including 3 views of the hand including the thumb and 2 views of the fingers of the right hand (with particular attention to the index and middle fingers) were ordered and done in the office. Imaging revealed no evidence of fractures in either the thumb, hand, or fingers.

In this case, it would be appropriate to report 73130-LT (hand with thumb) and 73140-RT (fingers). Modifier 59 would not be required, as HCPCS modifier RT and modifier LT accomplish the same thing (identifying different anatomic sites). Additionally, the correct ICD-10-CM code for supporting medical necessity would need to be reported, which would include the symptoms the patient was feeling and the injury sustained.

Don't forget the global components of TC and 26 when coding for radiology services. If the provider organization owns the equipment but contracts with an outside radiology group to review and interpret the findings with a report, only TC is reported for the technical component.

If the provider is contracted to review, interpret, and write a report on the image taken by another entity, then 26 is reported.

However, if the provider organization both owns the equipment and the physicians interpret and write the report, then the service is reported globally (without any modifiers).